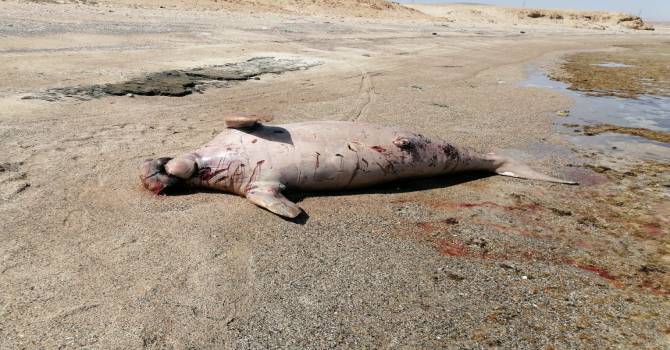 The investigation shows that it was an old and huge Dugong, probably dead for 3 days due to a collision with a boat propeller, which caused sever injuries in the head and body, he then hit corals on his way to the shores which caused him several scars.

Dugongs are believed to be the most endangered large mammal; it is considered to be one of the basic attractions in the Red Sea for divers from all-over the world to visit and take pictures of it.

They rise to the surface at irregular times to breathe, but on average they breathe once every 3-5 minutes while they live either alone, in pairs, or in small flocks that include between 3-6 animals, and their skin color ranges from light brown to gray, and their mouth is surrounded by hard-to-touch hair that benefits as a sensor, its nostrils are located at the top of the head, allowing it to breathe without having to rise too high from the water surface.