HEPCA conducted a clean-up campaign for a public beach in Fairouz - Al Ahyaa with the help of 100 volunteers who managed to collect about 6000 Kilograms of plastic debris from the beach. Many thanks for all the volunteers from the residents and the Deutche Hotelschule in Gouna for their contribution to this event.

As part of the regular clean-up campaigns for Islands in the Red Sea and the "No Plastic" campaign, HEPCA organized a clean-up campaign in Magawish Island, with the aid of 100 volunteers and removed the quantity of 22 bags/400 kg of plastic debris from the island. We would like to thank our partners in this initiative; The Red Sea Governorate, ETI, and National protectorates of the Red Sea. Many thanks to the Red Sea Scouts team, and the Nursing School of Hurghada for sending volunteers and to the single volunteers who came and participated in the event us.

For years now, governments and environmental organizations around the world have been sinking large pieces of outdated or damaged equipment into the ocean, turning them into artificial reefs. Subway carriages, naval ships, tanks and more rest on the sea floor, making homes for sea life and attracting divers. Artists have been busy as well, erecting underwater sculptures and memorials. Accordingly, HEPCA submitted a project proposal to H.E General Ahmed Abdullah, Governor of the Red Sea, to establish new artificial coral reef sites using outdated military equipment such as armored vehicles, soldier carriers, tanks and old cars. H.E General Ahmed Abdullah, Governor of the Red Sea, showed exceptional support and encouragement for this project. The project aims to reduce the pressure on the natural coral reefs around Hurghada where the number of dives in some dive sites have reached more than 200,000 annually, while the recommended carrying capacity should be from 5000 - 22,000 dives in the single dive spot. Thus, there is no alternative solution but to create and establish alternative diving sites to mitigate natural coral reefs of high scientific, environmental and economic value, each site can be created will generate millions of dollars annually on the Egyptian national income. In addition to economic value, the project aims at creating alternative diving sites, knowing that there are only 258 diving sites along the Red Sea coast carrying between 6 to 9 million dives a year, which is not enough to meet the increasing development rates of inbound tourism thus increased the Dive Sites. Sunken equipment will not only create new dive sites, but can make very effective habitats for Sea Life, providing good structure for corals to grow upon, which leads to a whole diverse ecosystem sprouting up. Artificial Reefs present a great tool for restoring deteriorated species, by providing a fresh substrate or aggregating key fish species. HEPCA, in collaboration with the Red Sea National Parks Authority, has identified seven sites in front of Hurghada as suitable sites for sinking the equipment. In the first phase, 15 pieces of outdated military equipment will be sunk in three sites as the first stage of this project. In cooperation with the concerned authorities, HEPCA will invite the Red Sea environmental protectionists and diving and water sports personnel to attend a conference in the very near future to explain the components of the project and to gather views and ideas on the most appropriate sites, methods of sinking as well as a sustainable management of these sites which should finalized by the end of this year.

After receiving several requests to arrange a clean-up in Fairouz Public beach, HEPCA acted accordingly and organized a thorough clean-up for the beach with the aid of 55 volunteers from the LOTUS Scholarship to collect approximately 1 ton of plastic debris from the beach. HEPCA also gave a lecture about the dangers of single use plastic on the marine/terrestrial life and the human health, then gave examples to alternative solutions and replacements. The LOTUS students were in Hurghada on a “Helwa ya Baladi” trip to learn more about the culture and diversity of their country and to engage in community service. Thank you, Dunes Egypt, for organizing this trip for the community service activities. #HEPCA #RedSea #BeachCleanUp  #SayNoToPlastic 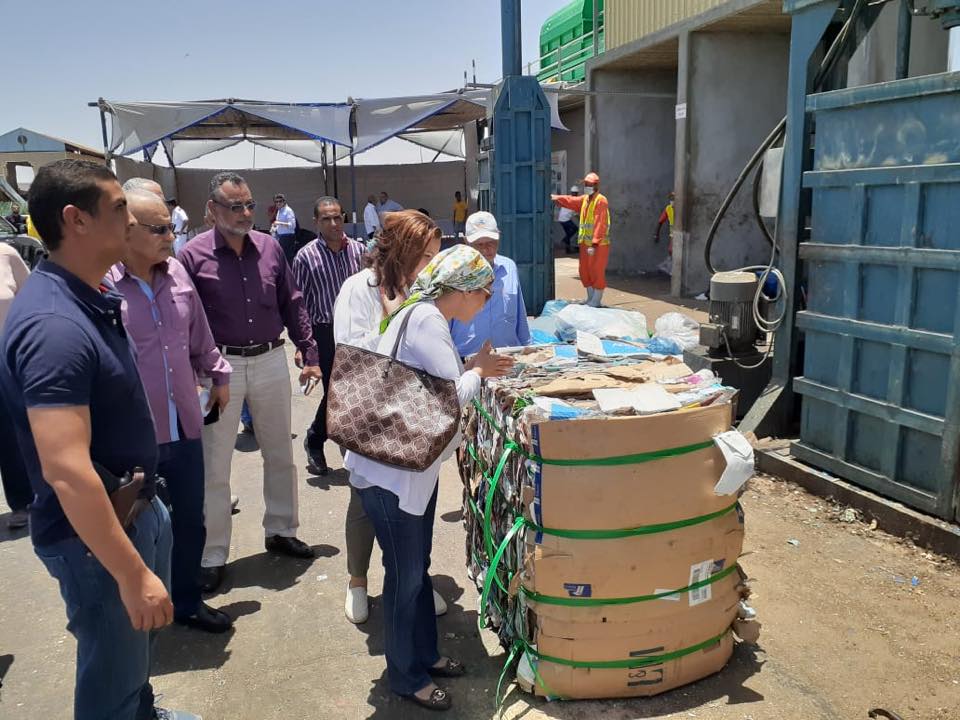 Dr. Yasmin Fuad, Environment Minister, visited HEPCA’s Solid Waste Management Plant as part of her plan to inspect the solid waste management system in Hurghada. Dr. Yasmin took a tour in the plant and listened to an explanation from HEPCA’s Solid Waste Team about the different sections and the advanced technology used in the factory. Nonetheless, the meeting with the minister was also to discuss HEPCA’s request to support the organic waste to be used as an alternative fuel in cement plants as well as the recycling of plastic and aluminum. H.E. The Minister visited Dahar Vegetable market and distributed some heavy bags as an alternative to light plastic bags. The Minister was keen to listen to the opinions of Hurghada residents and explained to them the reason behind it , and also supported the decision of H.E. General Dr. Ahmed Abdullah, Governor of Red Sea to ban single use plastic in the Red Sea.