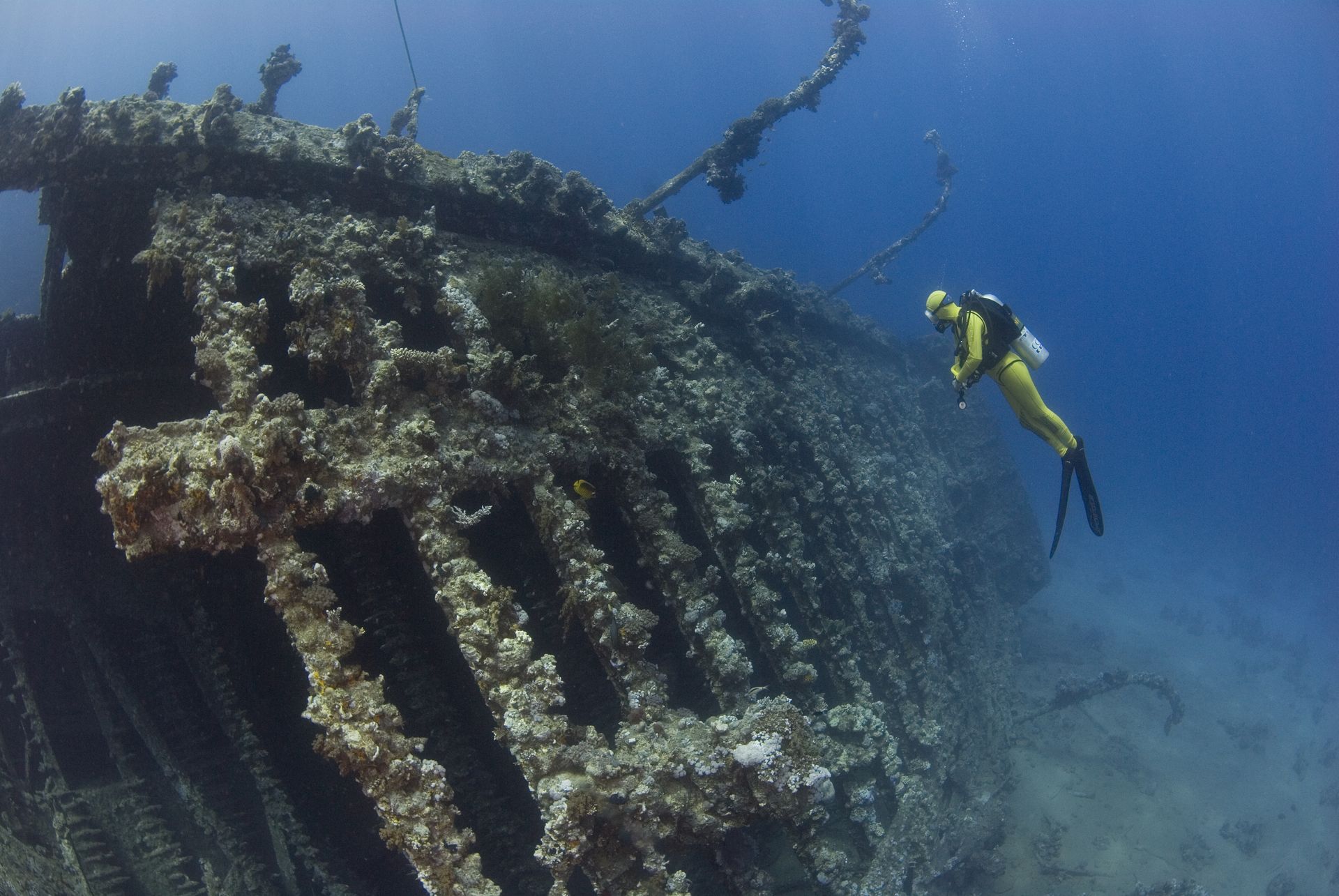 Every diver is acutely aware of the potential risks connected with wreck diving. However, equally significant threats exist to wrecks from diving activities. The very execution of a dive on a wreck can cause detriment to the integrity itself. There are two major activities that are negative to wrecks and that is of anchoring and the other is from a diver.

Every diver is acutely aware of the potential risks connected with wreck diving. However, equally significant threats exist to wrecks from diving activities. The very execution of a dive on a wreck can cause detriment to the integrity itself. There are two major activities that are negative to wrecks and that is of anchoring and the other is from a diver.

Improper mooring or anchoring can lead to destruction or collapse on any part of the structure of a wreck.  The impact of mooring directly onto a wreck is increased by local environmental conditions, such as a strong current and wind.  A live aboard diving vessel can weigh up to 400tonnes – the weight of this placed directly onto the superstructure of a decomposing wreck can have terrible consequences!

Quality of a wreck depends on both its biological and historical attributes.  The movement of divers, especially if there isn’t much elbowroom, can cause damage to the wreck itself and to the marine life who have found shelter and home within the structure.  Although accidental, direct hits (which might break corals or cause matter to fall down from the wreck’s wall) or side effects, such as the alteration of sedimentation processes taking place within the wreck can alter life on the artificial reef dramatically.

Intentional removal of parts, accessories or elements of the wreck is a crime: relic or souvenir hunting is a behavior that is absolutely not acceptable and disapproved by the entire diving community.

Divers must breathe underwater to survive.  However, the constant exhalation of air bubbles creates an accumulation of air inside the wreck which acts as a catalyst to the erosion/corrosion process.  Eventually, this will cause massive internal damage.

In 2007, HEPCA and its members denounced the unsustainable traffic and use of the wreck by officially launching the “Saving our Wrecks” campaign.  It was time for a change, for a new vision which would have allowed for the enjoyment of divers but whilst preventing the continuous and excessive abuse of her treasures.  The aim of the campaign was to manage an exaggerated and unregulated traffic which would have led, inexorably, to her destruction.

To avoid this catastrophic scenario, HEPCA and supporters started with the S.S. Thistlegorm, one of the top dive sites, closing the wreck for a month, in November 2007, to allow the realization of conservation interventions decided by common accord with the operators.

All these interventions and that of the wrecks of Rosalie Moller and the M/V Hebat Allah are part of HEPCA's campaign ‘Saving our Wrecks.’ An integral part of the campaign is to support the dive guides, operators, and even guests to monitor consistently to ensure proper use of the mooring systems and report any irregularities or damages to the wrecks.

As natural wear and tear is inevitable on the wrecks, it is important to report any violation to any of our Red Sea sunken treasures and be a part of just another ongoing effort the Red Sea community works on together to safeguard its resources.

The S.S. Thistlegorm and the Rosalie Moller were first in this dedicated intervention in 2007 and 2008, respectively.  Conservation work on the former, probably the most famous wreck in Red Sea, stirred up a hornet’s nest that resulted in huge hype and extended exposure in the international diving media. It has not been easy to realize the preservation plan, nor to make it universally understood: “Many dive operators consider the closure unpractical. However, the fact remains we are losing this wreck.” said Amr Ali in response to some critics from part of the diving industry.

Despite the initial discontent generated, all interventions made on the wrecks were considered as urgent and necessary and for this reason HEPCA continued.  The eventual situation was a collective commitment, with diving centers offering help and providing facilities to make the work happen.

The conservation operation commenced with a detailed assessment of the status of the wreck: including its structure, position and inclination but also its popularity and accessibility. Following this, target action plans were promoted, appropriate mooring systems were installed and air-escape outlets strategically drilled into the wreck.  Precise information was given to the operators concerning the proper use of the mooring lines whose efficiency plays a major role in the success of the operation.

The HEPCA Mooring team, supported Red Sea Explorers and blue o two, was in charge of the installation of a brand new buoy mooring system, composed of a total of 32 lines, each with separate ascent and descent lines, and the drilling of air-escape outlets.

Over a period of test weeks, most diving operators expressed their satisfaction with the new system. However, over the following three months that passed, around half the lines were damaged: a normal consumption rate for a site with this level of exploitation and exposed to these particular adverse environmental conditions.

The vessel operators highlighted the possibility to further enhance the system to increase safety and ease of use. A consultative meeting was held on the 24th February in Sharm El Sheik with managers of several dive centers and representatives of the CDWS and SSDM gathered with Amr Ali from HEPCA to review the system and discuss possible improvements. That day, the ‘Miky System’ was proposed; named after its designer Miky Clark, from Camel dive centre.

Interventions were made to enhance the mooring system, to make it more resistant and reduce possible mechanical tension on the wreck. In addition, it was agreed that boats, in order to use the mooring system, should also throw an anchor from the stern. This extra stability should help to ensure the lines do not become shredded by rubbing against the structure of the wreck in wind and strong currents.

In June 2008 attention was turned to the wreck of the Rosalie Moller. Sadly, this iconic Red Sea wreck suffered considerable damage over the last few years.

HEPCA undertook further assessment and proceeded with an installation of a mooring system to protect the fragile wreck from impending damage. Due to the depth of the wreck, technical divers were involved to carry out the work. The HEPCA mooring team was supported, once again, by the divers from Red Sea Explorers and blue o two, as well as Diving Attitude amongst others. Conventional moorings were not possible due to the depth and conditions of the wreck; therefore, a system of wires and ropes attached to the structure was arranged.

To date, designated dive centers in the area oversee the mooring system to ensure its proper usage for the protection of these legendary sites.

HEPCA became involved in yet another project which relates to the wreck conservation strategy: the 51m M/V Hebat Allah was intentionally sunk in 2004 and opened as the first and only artificial reef dive site in the Red Sea for technical divers in 2005. HEPCA, together with Global Underwater Explorers (GUE) Egypt and Colona Divers secured the wreck in 2009 with the installation of mooring lines.

The wreck offers a unique scientific opportunity for research on reef growth on an artificial substratum and on marine life diversity at depths greater than 35m. Initial assessments recorded extensive fish life, including groupers and lionfish, poor coral coverage likely due to the natural slow growth rate of the organisms, and the depth of the wreck and its distance from an already established coral reef.  HEPCA and GUE, with the support of Colona Divers, dive Hebat Allah on a regular basis to maintain and monitor the reef. 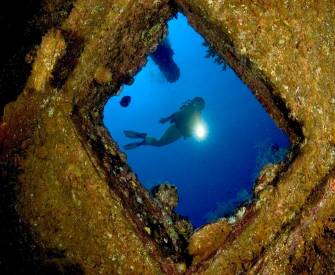